Past Life as a Bier Swindling, Dirndl Donning Fraulein 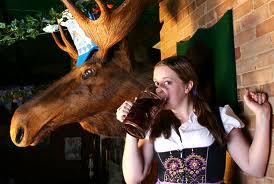 Jennifer Fitzgerald’s name isn’t exactly German, but that didn’t stop her from springing for a handmade dirndl on eBay after she took a job at Killmeyer’s Old Bavaria Inn two years ago. Since then she has supplemented her grad-school training in English with an education in wursts and weisses and is putting it to good use this week as Oktoberfest kicks into high gear.

To what extent do you play the part of a Bavarian beer maid? The German waiter tells us how to say things like, “Enjoy your meal.” And we all know how to hold three steins in our hand.

Do folks get down with the oompah band? They drag customers up into a conga line. People are more than happy to oblige, especially after one or two pints.

You have pig roasts on the last Sunday of each month. We get an oil drum and a 60-pound pig outside in the beer garden. We cook it out there from about 10 a.m. to 4:30 p.m. when it’s served with potatoes and sauerkraut. People love to be part of a pig roast that they don’t have to clean up after.

What sort of comments do you get about your uniform? The dirndl apparently brings attention to your chest, which I guess is the idea. Customers get drunk and make a few comments, but it’s all in good fun.

Do Manhattan customers ever bitch about getting lost or how far away you are? From the ferry, there’s only one bus, the S74. The trip is a half-hour, but it’s a straight shoot.

Do gluttons overindulge during the Tuesday all-you-can-eat special? I haven’t seen too many people get seconds or thirds of a full German meal. Behind the bar we have Underberg bitters, which is what they drink in Germany for an upset stomach.

Do customers ever try to drink through the entire list of 75 bottles? Definitely. Our list changes so much it’s kind of an uphill march. I think that the most I’ve ever served to a single customer was nine types of bottled beer from different parts of the world.

The place is supposed to be haunted — have you ever seen evidence of it? I heard a rumor of a small girl that was a ghost here. The bar itself is over 100 years old — the floorboards creak even if no one is around.